Beam me up Scotty! 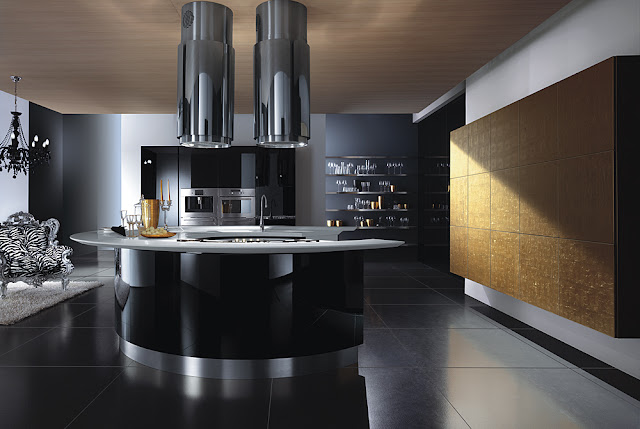 If you want to have a focused workspace, an area that allows you to command the room both functionally and socially then the horseshoe island is for you.  The island wraps itself around the kitchen user providing a near infinite amount of worktop area and the efficient movement between kitchen zones can be quantified in twists and shuffles instead of proper steps!  This kitchen allows the cook to become the main attraction surrounded by salivating tiers of family and friends, but this Roman amphitheatre kitchen has several limitations.
The tight curves can limit the use of base unit drawers and therefore the functional efficiency of the kitchen.  If drawers are used space can be wasted due to the parallel positioning of the runners.  A busy kitchen may also need a sous-chef but due to the functional focus of this design the second in command may end up treading on the chefs toes a little!  It also seems strange that in this instance the chef will need to walk around the island in order to reach the fridge, larder and ovens.  Maybe one of the screaming hoards, baying for gastronomic satisfaction on the outside of the island could do the honors there!  Or The Mogul suggests the easier option of placing them directly behind the island?!
If all the attention gets too much for the Chef and his apprentice they could always request some inter-galactic assistance and be instantly transported though the extraction system, just like Spock and Captain Kirk!
Beam me up Scotty!
Posted by Kitchen Mogul at 22:22