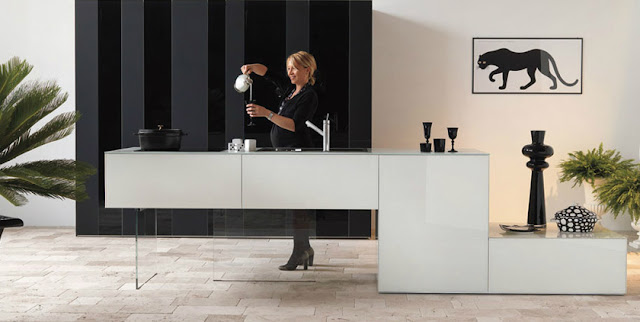 Kitchen design is certainly becoming more and more artistic!  Here we see an island which is formed by using simple shapes and the result is very dramatic.  The structure appears to float in mid air, defying gravity and repelling an architectural connection.  But the designers haven't quite pulled off an engineering masterpiece; this cantilever doesn’t float instead it is supported by using clear acrylic.
You can’t knock this design though as it has real visual impact becoming a real talking point at any social gathering.
Interesting too that the model in the image is pregnant!  She is also creating a very naturally formed cantilever of her own.
Love it!!
Posted by Kitchen Mogul at 09:56