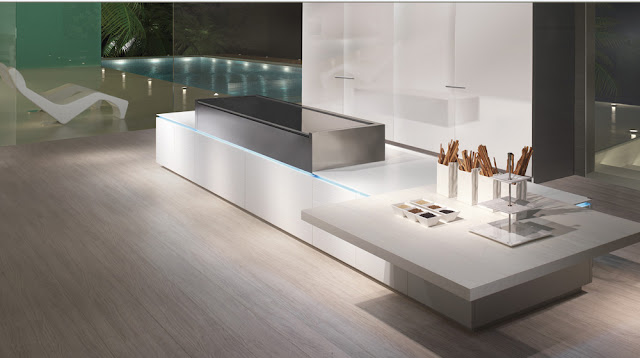 This image is fantastic and looks like something from the set of Miami Vice!  You can only imagine that the person who owns this kitchen will also have another high value consumable parked in their garage.  And just like its four wheeled counterpart this kitchen is a high performance product with the ability to turn a few heads when you put the top down!
The functional elements of this kitchen have been neutralised making the design appear more artistic and allowing it to fully complement the surrounding bricks and glass.  The cooker and sink are concealed inside the raised area on the island and in true “Shape Shifter” fashion it can easily show you what’s under the bonnet by raising the worktop up to create a splash-back and revealing a functional cooking and cleaning zone underneath.  It could be argued though that this feature should actually be placed on the other side of the island with the functional tall units behind as this would make everything more easily accessible within the shortest walking distance possible.  However, the client who owns this kitchen may not cook very often and may therefore have opted to take in the pool views over any functional priorities!
It could also be argued that having such a large amount of the island set at a lower level is ergonomically inefficient when considering basic function, but then if you don’t cook that much and socialise a lot this area could double up as a lounging area!  Great for discussing the paddle shift on a Ferrari 458 Italia!
The Mogul loves the offset square overhang designed for informal seating!  Angular, asymmetrical perfection!
Posted by Kitchen Mogul at 21:49