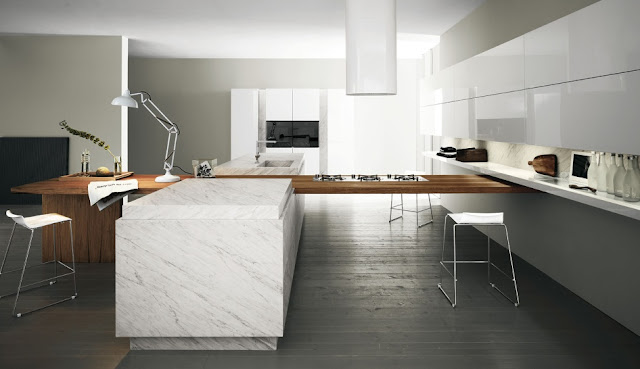 This is an imposing kitchen, a dominant example of stylish functionalism that has the ability to cause gasps of social envy and cause the surrounding architecture to pale into insignificance in its presence.  The island dominates the space and the trendy timber bridge element sinks into the heavy set worktop as though it is a heated wafer and the island where raspberry ripple ice cream!
The design ticks a lot of boxes offering sociability and visual gratification in equal measure but The Mogul must question several elements of the design.  The bridging element, although a marvel of technical achievement having concealed the services to the hobs within what appears to be a piece of solid wood, does divide the kitchen in two!
This imposing border effectively makes half of the kitchen inaccessible to the kitchen user.  There is a great deal of this kitchen, most of the foreground in-fact that is dedicated to servicing non-cooking activities.   Could it be argued that this design should be more functionally sympathetic and that there has been a luxurious promotion of aesthetical ideology here?  You decide!
Posted by Kitchen Mogul at 22:05